Headache and visual disturbances are the main presenting symptoms of idiopathic intracranial hypertension (IIH) characterized by increased intracranial pressure (ICP) with an unknown cause. We aimed to investigate the antibodies against optic neuritis-associated glial antigens, aquaporin-4 (AQP4) and myelin oligodendrocyte glycoprotein (MOG) and uncharacterized neuronal membrane antigens in IIH patients. Consecutive patients diagnosed according to Friedman revised diagnostic criteria and control subjects were included after their consent. All serum samples were analyzed for antibodies against AQP4 and MOG using cell-based immunofluorescent assays and for uncharacterized neuronal membrane antigens by indirect immunocytochemistry utilizing live neurons. Sera of 34 patients with IIH and 40 control subjects were investigated but none of the patients showed AQP4 and MOG antibodies. However, serum IgG of five IIH patients showed reactivity against membrane antigens of rat hippocampal and cortical neurons. Interestingly, three out of these five patients had nonspecific white matter lesions on MRI, whereas only four of all other patients had these lesions (p = 0.048). AQP4 and MOG antibodies do not seem to have a role in the pathophysiology of IIH. However, association of immunocytochemistry findings with the presence of white matter lesions may suggest that immunological factors contribute to the pathogenesis of IIH in at least some of the patients. 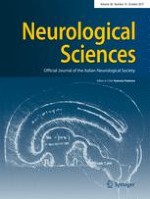 Quarterly repeat cycles of onabotulinumtoxinA in chronic migraine patients: the benefits of the prolonged treatment on the continuous responders and quality-of-life conversion rate in a real-life setting

Safety and efficacy of Cerebrolysin in motor function recovery after stroke: a meta-analysis of the CARS trials

Pure motor monoparesis due to infarction of the "hand knob" area: radiological and morphological features