Gliomatosis cerebri (GC), a rare and deadly CNS neoplasm characterized by involvement of at least three cerebral lobes, predominantly affects adults. While a few small series have reported its occurrence in children, little is known about the molecular characteristics of pediatric GC. We reviewed clinical, radiological, and histological features of pediatric patients with primary GC treated at our institution over 15 years. Targeted sequencing of mutational hotspots in H3F3A, IDH1/2, and BRAF, and genome-wide analysis of DNA methylation and copy number abnormalities was performed in available tumors. Thirty-two patients [23 (72 %) with type 1 and 9 (28 %) with type 2 GC] were identified. Median age at diagnosis was 10.2 years (range 1.5–19.1). A median of 4 cerebral lobes (range 3–8) was affected at diagnosis. In addition, symmetrical bithalamic involvement was observed in 9 (28 %) patients. Twenty-two patients (69 %) had an anaplastic astrocytoma. Despite aggressive therapy, only two patients younger than 3 years at diagnosis are long-term survivors. Clustering analysis of methylation array data from 18 cases classified tumors as IDH (n = 3, 17 %), G34 (n = 4, 22 %), mesenchymal (n = 3, 17 %), and RTK I ‘PDGFRA’ (n = 8, 44 %). No tumors were classified as K27 subgroup. PDGFRA was the most commonly amplified oncogene in 4 of 22 tumors (18 %). H3F3A p.G34 occurred in all cases classified as G34. Two of 3 cases in the IDH subgroup had IDH1 p.R132H. No H3F3A p.K27 M, IDH2 p.R172, or BRAF p.V600E mutations were observed. There was a trend towards improved survival in the IDH subgroup (P = 0.056). Patients with bithalamic involvement had worse outcomes (P = 0.019). Despite some overlap, the molecular features of pediatric GC are distinct from its adult counterpart. Like in adults, the similarity of genetic and epigenetic characteristics with other infiltrative high-grade gliomas suggests that pediatric GC does not represent a distinct molecular entity. 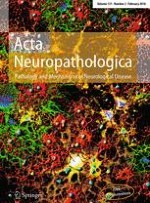 Erratum to: Gliomatosis cerebri: no evidence for a separate brain tumor entity

Gliomatosis cerebri: no evidence for a separate brain tumor entity