To compare the efficacy of glucocorticoids in primary focal segmental glomerulosclerosis (pFSGS) patients with moderate proteinuria. Registered at http://​www.​chictr.​org.​cn/​, study No. ChiCTR-OPN-17012789.

pFSGS patients with urine protein between 1.0 and 3.5 g/24 h were recruited from 2006 to 2016. No decline in urine protein > 50% was observed after 2 months of run-in angiotensin-converting enzyme inhibitors/angiotensin-receptor blockers (ACEI/ARB) treatment. Patients were assigned to study group (glucocorticoids with ACEI/ARB) or control group (ACEI/ARB without glucocorticoids). Variables including 24-h urinary protein, serum albumin and serum creatinine during the trial were recorded. Remission was defined as proteinuria < 0.3 g/24 h or declined > 50%, and our composite end point as > 30% decrease of eGFR or eGFR < 30 ml/min.

Additional glucocorticoids therapy is more efficacious compared to ACEI/ARB alone in the treatment of patients with pFSGS and moderate proteinuria. 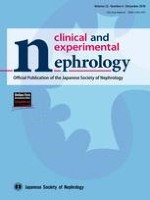 Correction to: Association of adiposity with hemoglobin levels in patients with chronic kidney disease not on dialysis

Trace proteinuria by dipstick screening is associated with metabolic syndrome, hypertension, and diabetes

Safety and Efficacy of Benzbromarone and Febuxostat in Hyperuricemia Patients with Chronic Kidney Disease: A Prospective Pilot Study

Comparison of the effects of tolvaptan and furosemide on renal water and sodium excretion in patients with heart failure and advanced chronic kidney disease: a subanalysis of the K-STAR study