Poor glycemic control is an independent risk factor for overall and disease-specific mortality after esophagectomy for advanced-stage ESCC. 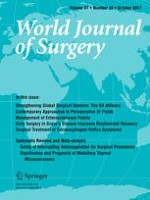 Clinicopathological Significance and Prognosis of Medullary Thyroid Microcarcinoma: A Meta-analysis

The Impact of Healthcare Privatization on Access to Surgical Care: Cholecystectomy as a Model

The Identification, Preservation and Classification of the External Branch of the Superior Laryngeal Nerve in Thyroidectomy