Although the functional results following DMEK are better than after DSAEK, DSAEK still seems to be the standard procedure, as surgeons fear losing grafts during DMEK graft preparation. Therefore, eye banks offer precut DMEK grafts for direct use by the surgeon. Here, we analysed the functional results and complication rates for a precut technique compared to fresh preparations.

We retrospectively compared 453 standard to 11 precut (1–2 days before surgery) DMEK cases. Precut preparations did not differ from the standard preparation, except that the preparation was stopped after trephination with the graft still attached in a small central area. The preparation had to be completed before surgery by peeling off the centrally attached part of the graft. This technique was first tested in an experimental series of 14 grafts, which were unsuitable for transplantation. All surgeries were performed in the same standardized way.

Because of the statistically significant higher graft failure rate in the precut group, we stopped using this technique, so the numbers in this retrospective case series are small. The higher graft failure rate may be explained by (ultra)structural changes in the DMEK graft (e.g. accumulation of dextran) during the second storage period. Therefore, careful evaluation is recommended before using precut DMEK grafts stored in dextran containing media in order to avoid early primary graft failures.
Anzeige 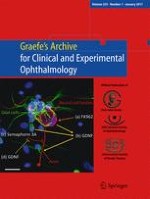 Intraretinal changes in the presence of epiretinal traction