The online version of this article (https://​doi.​org/​10.​1007/​s00701-017-3438-z) contains supplementary material, which is available to authorized users.
Reem D. Almutairi and Ivo S. Muskens are shared first author
Rania A. Mekary and Hasan A. Zaidi are shared last author

Contents of this manuscript were presented at the North American Skull Base Society meeting, New Orleans, March 3–5, 2017

Microscopic transsphenoidal surgery (mTSS) is a well-established method to address adenomas of the pituitary gland. Endoscopic transsphenoidal surgery (eTSS) has become a viable alternative, however. Advocates suggest that the greater illumination, panoramic visualization, and angled endoscopic views afforded by eTSS may allow for higher rates of gross total tumor resection (GTR). The aim of this meta-analysis was to determine the rate of GTR using mTSS and eTSS.

A meta-analysis of the literature was conducted using PubMed, EMBASE, and Cochrane databases through July 2017 in accordance with PRISMA guidelines.

Among patients who were not randomly allocated to either approach, eTSS resulted in a higher rate of GTR as compared to mTSS for all patients and for NFPA patients alone, but only in a fixed-effect model. For FPA, however, eTSS did not seem to offer a significantly higher rate of GTR. These conclusions should be interpreted with caution because of the nature of the included non-comparative studies. 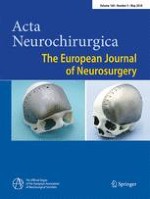 The timing of stereotactic radiosurgery for medically refractory trigeminal neuralgia: the evidence from diffusion tractography images

Role of the petrous ridge and angulation of the trigeminal nerve in the pathogenesis of trigeminal neuralgia, with implications for microvascular decompression

Editorial (by Invitation) - Spine - Other

Intradural disc herniation: how I do it