The eight-plate system for angular deformity correction is well known, reliable and effective at any age during growth. Due to high implant costs, we sought to evaluate the effectiveness and safety of a less expensive alternative.

Between 2006 and 2011, 41 children with angular deformities were managed using a two-hole one-third tubular plate in cases where an eight plate would normally be indicated. Inclusion criteria in this retrospective study were: genu valgum and genu varum. X-ray documentation was performed before and after surgery and patients were followed clinically every 3 months after surgery. The cost per implant was 361.40 Sfr (Swiss Francs) compared to the eight plate at 737 Sfr.

Mean time for correction was 13 months. A mean LDFA/MPTA after correction of 89.9°/86.8° was recorded, as well as a mean correction angle of 6.8°/6.6°. The complication rate was 6.6 % (one superficial wound infection and one insufficient correction in an older child). These results compare favourably with published data on the eight plate.

The two hole one-third tubular plate seems to be a clinically and also cost effective alternative to the eight plate. Full deformity correction is gained for a fraction of the cost. Level of Evidence: Level III 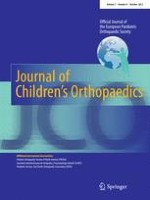 Intramedullary rod fixation of fibrous dysplasia without use of bisphosphonates

Prevalence of developmental dysplasia of the hip in children with clubfoot

The risk of non-union per fracture in children