The aim of the study was to investigate overall patterns in labour market affiliation, risk for permanently reduced work ability and prevalence of long-term sickness absence among women diagnosed with gynaecological cancer.

We followed 8451 women diagnosed with ovarian, endometrial or cervical cancer, and 72,311 women with no history of cancer in nationwide registers for up to 19 years (mean 7.5 years). We computed hazards ratios for permanently reduced working ability and annual proportions of long-term sick leave.

Patterns of labour market affiliation varied by cancer diagnosis and stage. The hazard of permanently reduced working ability was increased for survivors of all three cancers but most pronounced for women diagnosed with advanced ovarian cancer. The highest hazard ratios were found 2–5 years after diagnosis, and they persisted for years in all groups and throughout the follow-up period of 19 years in women diagnosed with advanced cervical cancer. In the subgroups of women who continued to be potentially active on the labour market, long-term sick leave was more prevalent among cancer survivors than women with no history of cancer up to 10 years after diagnosis.

Women diagnosed with localised as well as advanced gynaecological cancer are at prolonged risk for permanently reduced working ability and long-term sick leave.

Gynaecological cancer can have long-term as well as permanent consequences for working ability, and survivors who remain active on the labour market might have to take more sick leave even years after cancer diagnosis than other women at their age. 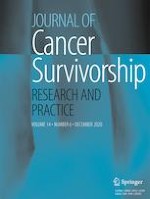 The impact of intimate partner violence on breast and cervical cancer survivors in an integrated, safety-net setting

Can the provision of sexual healthcare for oncology patients be improved? A literature review of educational interventions for healthcare professionals

The use of survivorship care plans by female racial and ethnic minority breast cancer survivors: a systematic review