Middle- and low-income countries bear 80 % of the global chronic disease burden. Population-level, multi-sectoral approaches to promoting healthful lifestyles that take into local physical, socioeconomic, and sociocultural characteristics of both the environment and the population are needed. The “Nuestra Voz (Our Voice)” is one such approach that involves neighborhood residents acting as “citizen scientists” to systematically gather information on the barriers and facilitators of physical activity in their neighborhoods and then use their data to collectively advocate for local environmental- and policy-level changes to support active living. We pilot tested this approach in Cuernavaca, Mexico with adults and adolescents. This community-engaged and participatory approach is driven by residents, who utilize a GPS-enabled electronic tablet-based application with simple audio-based instructions to take photographs and record audio narratives of facets of their neighborhood that promote or hinder active living. After collecting these data, the citizen scientists come together in a community meeting and use their data to prioritize realistic, multi-level changes for promoting active living in their neighborhoods. A survey assessed participants’ acceptability of the approach. Participating citizen scientists included 32 adults and 9 adolescents. The citizen scientists rated the acceptability of five of the nine acceptability survey items with an average of 4.0 or higher out of 5.0, indicating they thought it was “fun,” were comfortable carrying the tablet, were likely to use it again, and would recommend it to friends and family. Items with average scores of less than 4 were all related to safety concerns. The most common barriers reported by citizen scientists using the tablet were poor sidewalk quality, presence of trash, negative characteristics of the streets, unpleasant aesthetics (e.g., graffiti), and presence of parks and recreational facilities. The Our Voice citizen scientist approach using the Discovery Tool has high potential for assisting communities in diverse settings to begin to identify both local barriers to active living as well as potentially useful strategies for promoting physical activity in culturally congruent ways that are appropriate and feasible in the local context. 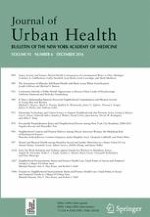