We aimed to assess the effects of exposure to tobacco smoke, alcohol and illegal drugs during early pregnancy on the head circumference (HC) at birth of otherwise healthy neonates.

A follow-up study from the first trimester of pregnancy to birth was carried out in 419 neonates. An environmental reproductive health form was used to record data of substance exposure obtained during the first obstetric visit at the end of the first trimester. A multiple linear regression model was created for this purpose.

Mild to moderate alcohol consumption diminishes the at-birth HC of theoretically healthy newborns in a linear form. There was no threshold dose. We perceived a need for increasing the awareness, and for training, of health care professionals and parents, in regard to risks of alcohol consumption and for recommending abstinence of these substances in both parents during pregnancy. It should also be remembered that medical ionizing radiation should be performed only during the first half of the cycle in fertile women. We think that our study has an important social impact as it affords data for implementing policies for promoting “healthy pregnancies”. 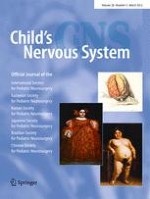 Multiloculated hydrocephalus: a review of current problems in classification and treatment

Atrial fibrillation as an uncommon presentation in a large pleomorphic xanthoastrocytoma