To evaluate a surgical procedure of canal wall-up mastoidectomy without incision of the canal which enables accelerated healing and enhances hearing outcome.

A total of 79 patients were enrolled. A canal-incisionless technique was used in 37 patients undergoing canal wall-up/down mastoidectomy (CWU/DM), explo-mastoidectomy, and cochlea implantation as staged operation after obliteration of the mastoid, and canal incision was used in the remaining 42 patients as comparison group.

Preoperative and postoperative pure tone audiometry/word recognition score and postoperative status including the healing time and complications were analyzed. Healing time of the canal-incisionless procedure (2.7 weeks) was shorter than that of conventional mastoidectomy with canal incision (5.7 weeks). Complication rate of the canal-incisionless procedure was lower than that of canal incision approach, even though statistical meaningless.

Despite the small sample size of our study, in patients undergoing CWDM, explo-mastoidectomy, and cochlea implantation, more acceptable healing was achieved using the canal-incisionless technique than with the canal incision technique. CWU/DM without canal incision is useful to achieve optimal surgical view, eliminate pathology of the middle ear, and accelerate healing time. 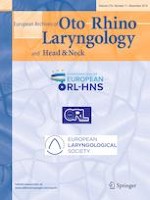 YouTube™ as a source of information for patients undergoing laryngectomy: a thematic analysis

Immunohistochemical analysis of MMP-13 and EMMPRIN in epithelial odontogenic lesions

Orientation of the premaxilla in the origin of septal deviation