Health and social service use among old people in the last 2 years of life | springermedizin.de Skip to main content
TOOLBAR 1 2 3 4
SUCHE MENÜ 1 2 3 4

This study focuses on differences in health and social service use in the last 2 years of life among Finnish people aged 70–79, 80–89, and 90 or older and on the variation in service use in the various municipalities. The data set, derived from multiple national registers, consists of 75,578 people who died in 1998–2001. The services included hospitals and long-term-care facilities, use of regular home care, and prescribed medicines. General hospital and public long-term care were the services most commonly used: general hospitals for younger age groups and public long-term care for older groups. The number of inpatient days in hospital was lower with increasing age, but older age groups used long-term care more frequently. Men had more hospital inpatient days than women, but women used more long-term care. The number of hospital inpatient days increased rapidly in the last months of life, almost doubling in the final month. Days in public long-term care increased regularly in the last 2 years of life. Variation in both hospital and long-term care by municipality was remarkable. The results indicate that, among people aged 70 years and older, age is a major determinant of care in the last 2 years of life. The variation in the use of care by municipality and the differences between men and women deserve more detailed analysis in future. 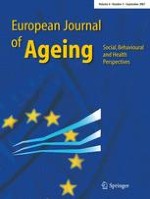 Health shocks and retirement: the role of welfare state institutions

Education of preventive home visitors: the effects on change in tiredness in daily activities