Increasing numbers of North Koreans are fleeing their country due to economic insecurity and political persecution, with over 1000 North Koreans Refugee (NKR) claims in Canada in the past decade. There is little published on their health. Using a Community-Based Participatory Research (CBPR) methodology, we investigated NKR health status through a retrospective chart review of 1022 patients rostered at a Toronto refugee clinic between December 2011 and June 2014. The health status of 117 NKRs was compared to that of 905 other refugees seen during the same period. There were lower rates of chronic diseases, including obesity and elevated blood pressure, among NKRs. Conversely, some infectious diseases were more prevalent, including hepatitis B and chlamydia. Female NKRs had higher rates of abnormal cervical cytology. This study uniquely uses CBPR methodology to examine the health of NKRs, and can help guide targeted interventions in this population. 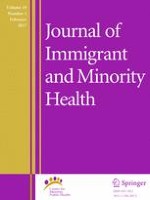 Conceptualizing the Pathways and Processes Between Language Barriers and Health Disparities: Review, Synthesis, and Extension

Food Hardship and Obesity in a Sample of Low-Income Immigrants