Although the acquisition of heat acclimation (HA) is well-documented, less is known about HA decay (HAD) and heat re-acclimation (HRA). The available literature suggests 1 day of HA is lost following 2 days of HAD. Understanding this relationship has the potential to impact upon the manner in which athletes prepare for major competitions, as a HA regimen may be disruptive during final preparations (i.e., taper).

The aim of this systematic review and meta-analysis was to determine the rate of HAD and HRA in three of the main physiological adaptations occurring during HA: heart rate (HR), core temperature (T c), and sweat rate (SR).

Data for this systematic review were retrieved from Scopus and critical review of the cited references.

Studies were included when they met the following criteria: HA, HAD, and HRA (when available) were quantified in terms of exposure and duration. HA had to be for at least 5 days and HAD for at least 7 days for longitudinal studies. HR, T c, or SR had to be monitored in human participants.

The level of bias in each study was assessed using the McMaster critical review form. Multiple linear regression techniques were used to determine the dependency of HAD in HR, T c, and SR from the number of HA and HAD days, daily HA exposure duration, and intensity.

Twelve studies met the criteria and were systematically reviewed. HAD was quantified as a percentage change relative to HA (0% = HA, 100% = unacclimated state). Adaptations in end-exercise HR decreased by 2.3% (P < 0.001) for every day of HAD. For end-exercise T c, the daily decrease was 2.6% (P < 0.01). The adaptations in T c during the HA period were more sustainable when the daily heat exposure duration was increased and heat exposure intensity decreased. The decay in SR was not related to the number of decay days. However, protracted HA-regimens seem to induce longer-lasting adaptations in SR. High heat exposure intensities during HA seem to evoke more sustained adaptations in SR than lower heat stress. Only eight studies investigated HRA. HRA was 8–12 times faster than HAD at inducing adaptations in HR and T c, but no differences could be established for SR.

The available studies lacked standardization in the protocols for HA and HAD. 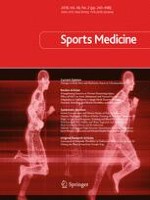 Author’s Reply to Nunes et al.: Comment on: “Comparison of Periodized and Non-Periodized Resistance Training on Maximal Strength: A Meta-Analysis”

The Effect of Natural or Simulated Altitude Training on High-Intensity Intermittent Running Performance in Team-Sport Athletes: A Meta-Analysis

Acute Effects of Dynamic Stretching on Muscle Flexibility and Performance: An Analysis of the Current Literature

Post-exercise Ingestion of Carbohydrate, Protein and Water: A Systematic Review and Meta-analysis for Effects on Subsequent Athletic Performance