For patients at high-risk of developing hepatocellular carcinoma (HCC), biannual ultrasound surveillance has long been recommended, in order to detect the tumor in the early, potentially curative stages. However, globally reported HCC surveillance rates vary greatly, ranging from as low as 1.7 to as high as 80%. Our aim was to assess the utilization of surveillance with biannual ultrasound in high-risk Croatian patients and to identify the factors that impact the implementation of the recommended protocol.

This retrospective study included 145 newly diagnosed HCC patients in the period from January 2010 to September 2015. We identified low-risk and high-risk patients. The latter were further subdivided into the regular biannual ultrasound surveillance group and the non-surveillance group. The groups were compared according to demographic characteristics and BCLC stage at the time of HCC diagnosis.

HCC surveillance is still underutilized in high-risk Croatian patients despite its obvious benefits possibly due to the untimely diagnosis of the chronic liver disease. 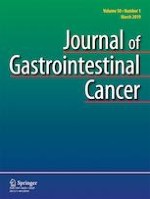 Expression and Serum Levels of Mucin 5AC (MUC5AC) as a Biomarker for Cholangiocarcinoma: a Meta-analysis

Primary Squamous Cell Carcinoma of the Pancreas: a Case Report and Literature Review