The proto-oncogene, HER2, has prognostic and predictive relevance in invasive breast cancer (IBC). HER2 testing of primary IBC guides treatment selection and is assumed to reflect HER2 status of associated metastases, although HER2 discordance between IBC and metastasis has been reported. Systematic review and meta-analysis of HER2 status in IBC and its paired loco-regional or distant metastasis were done. Quality appraisal considered whether (within-subject) testing conditions were maintained for paired primary and metastasis. Random effects logistic regression models were used to estimate pooled within-subject HER2 discordant proportions and to examine study-level covariates, including tumor-related and testing-related variables, potentially associated with HER2 discordance differences across (between) studies. Modelled paired HER2 data for primary and metastatic cancer (2520 subjects, 26 studies) showed a pooled HER2 discordance of 5.5% (3.6–8.5%). Sensitivity analysis, excluding the only study not maintaining same conditions for paired testing, gave a pooled estimate of 5.2% (3.5–7.8%). Pooled discordant proportion was not associated with differences between studies in test type, test scoring or interpretation criteria, subjects’ median age, study time-frame, or HER2 positivity in primary cancer (all P > 0.05). However, type of metastasis was significantly associated with estimated HER2 discordance (P = 0.0017): studies of primary tumor paired with distant metastases had higher discordance [11.5% (6.9–18.6%)] than studies of primary paired with lymph node metastases only [4.1% (2.4–7.2%)], or those paired with nodal or various metastases [3.3% (2.0–5.6%)]; P < 0.01. HER2 discordant proportion was higher where paired metastases were metachronous relative to synchronous to primary IBC (P = 0.0024). Sensitivity analysis provided weak evidence (P = 0.074) that discordance in the direction of change from HER2-negative primary cancer to HER2-positive paired metastasis was more likely than the reverse. Study-level meta-analysis suggests factors associated with the type of metastasis as underlying mechanisms for observed HER2 discordance between primary IBC and paired metastasis. Test-related factors did not account for differences across studies in the HER2 discordant proportion. 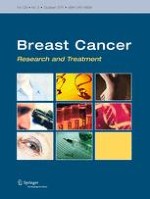