Hereditary breast cancer has been formally investigated since the middle of the 19th century [ 1– 3]. About thirty years ago, epidemiological and genetic linkage studies of multiple-case families have guided the identification of TP53 mutations as a cause of Li-Fraumeni Syndrome [ 4– 6] and of BRCA1 and BRCA2 as first genes in which mutations strongly predispose to breast and ovarian cancer [ 7, 8]. There are further rare syndromes which include the occurrence of breast cancer as part of the disease spectrum, and the underlying genes have been identified by positional cloning. Apart from Li-Fraumeni Syndrome, these include Cowden Disease ( PTEN) [ 9, 10], Peutz-Jeghers Syndrome ( LKB1/STK11) [ 11, 12], Lynch Syndrome ( MSH2,MLH1) [ 13], Bloom’s Syndrome ( BLM) [ 14] and Ataxia-Telangiectasia ( ATM) [ 15]. In addition, familial lobular breast cancer has been associated with germ-line mutations in CDH1, the gene for E-cadherin [ 16, 17]. Although the above-mentioned syndromes are rare, they need to be kept in mind if a breast cancer patient presents with a more complex disorder or suspicious family history. For the recessive Ataxia- Telangiectasia and Bloom’s Syndrome, the monoallelic occurrence of mutations predisposes heterozygous carriers outside of syndrome families to cancer, as will be described in more detail below.
While the identification of genes underlying these syndromes has been largely achieved through linkage analysis of large multiple-case pedigrees and positional cloning, these genes represent only a small subset of the estimated heritable fraction and further linkage studies have been unfruitful. However, hereditary breast cancer syndromes only mark the extreme end of a wide spectrum of genetically influenced breast carcinomas. During the past years evidence has been accumulated that breast cancer is a polygenic trait and also that several more susceptibility genes exist [ 18– 21]. Their mutations have differential impact according to the minor allele frequencies and the magnitude of the allelic effect, which generally show an inversely proportional relationship (Figure  1) [ 22]. In the following, we briefly summarize present knowledge about breast cancer susceptibility genes and discuss their implications for risk prediction and clinical practice.
×
Anzeige

Implications for risk prediction and therapy

Hereditary breast cancer represents a challenge in terms of genetic counselling as well as preventive and therapeutic decisions. The identification of mutations in individuals from multiple-case families with breast cancer makes it possible to predict the age-dependent risk for different cancers, including recurrence risks in the already affected, and to counsel patient and blood relatives more appropriately. With the identification of modifying variants, the risk prediction for BRCA1 or BRCA2 mutation carriers can be further refined. Risk prediction may lead to an increased surveillance or targeted prevention including magnetic resonance imaging, medication (such as tamoxifen) or preventive surgery (such as prophylactic oophorectomy). In many countries, this is available to patients with a high (over 30%) lifetime risk such as BRCA1 or BRCA2 mutation carriers, whereas a more restrained position is taken for patients with intermediate-penetrance mutations conferring an about 3-fold increase in breast cancer risk such as ATM or CHEK2. Although the female carriers for those mutations could also benefit from increased surveillance, large studies on the efficacy of such measures are lacking. No further counselling is provided for patients carrying common risk alleles at polymorphic loci, as these risks are too small individually to be clinically meaningful. This situation may change, however, if one considers cumulative effects for several of those variants that can reach substantial risk modifications already at the present stage of knowledge. Previous estimates predicted that half of the population at highest risk may account for about 88% of breast cancer cases [ 94]. Using the current set of loci and assuming that all loci combine multiplicatively, risks of breast cancer were estimated approximately 2 · 3-fold and 3-fold higher for individuals in the top 5% and 1% of the population, relative to the population average [ 72]. With the identification of many more low-risk loci it may become possible to calculate combinatorial risks that could be useful in a stratified approach of cancer prevention in the future [ 148– 150].
Population diversity needs to be taken into account for breast cancer susceptibility at all levels of penetrance. Due to founder effects, single mutations can contribute significantly to the breast cancer burden in founder populations and intermediate-risk alleles in some genes have almost exclusively been found in certain population groups, such as for FAM175A and RAD50 in the Finnish population or NBN in Slavic populations [ 28, 41– 44]. In fact, much of the present knowledge about those genes relies on particular founder mutations, and in regard of allelic heterogeneity one must be cautious to extrapolate and generalise these observations to other less common alleles. Similarly, common polymorphisms at breast cancer susceptibility loci will differentially impact on breast cancer risk in different ethnic groups, if they display different frequencies or different linkage disequilibrium patterns across populations, such as CASP8*D302H that is virtually absent in Asians [ 121], or the ESR1 locus at which different risk alleles SNPs have emerged in Asians and Europeans [ 100, 103, 125– 127]. Gene-based strategies for an improved risk prediction will therefore need to be elaborated in a population-specific way.
Anzeige
In addition to risk prediction, identifying the genetic basis of breast cancer in the individual patient might have further prognostic and therapeutic implications. Breast cancer therapy has been guided for long by the presence or absence of gene products such as hormone receptors or HER2/neu. These tumour characteristics are partly determined by germ-line mutations, as exemplified by BRCA1 mutations which are frequently associated with triple-negative breast cancers, but breast cancer pathology also seems to be influenced by low-penetrance variants like those in FGFR2 that are strongly correlated with estrogen-receptor positive disease [ 95, 96, 151]. In fact, many of the hitherto identified variants appear to preferentially associate with a defined estrogen receptor status (Table  2) [ 119, 123, 152]. Further studies are presently underway to investigate whether SNP profiling could be of prognostic value [ 153].
The identification of breast cancer susceptibility alleles may also guide the development of new drugs that target additional breast cancer pathways, such as oncogenic signalling mediated by FGF receptors [ 154] or mutation accumulation mediated through ABOBEC3B. Such new drugs are particularly needed in the treatment of otherwise poorly targetable breast carcinomas such as triple-negative tumours [ 155] and the identification of risk alleles in genes like BABAM1 or MDM4 in this particular subgroup may offer promising avenues for new therapeutic regimens. The concept of “synthetic lethality” as exemplified by the introduction of PARP1 inhibitors into treatment of patients with BRCA1 or BRCA2 mutations may also prove useful in the development of other compounds to target additional genetic predispositions [ 156– 158].

Tremendous progress has been made during the past few years in deciphering the polygenic susceptibility to breast cancer. The results suggest that key pathways are targeted by different sources of genetic variation influencing the hereditary risk. To a large extent these findings fulfil the predictions made some forty years ago that “genes may either cause susceptibility of the mammary gland to hormonal action [or to a virus], or induce an easy transformation from a normal to a malignant cell” [ 1]. It can be anticipated that hundreds of additional loci are still to be detected that collectively form the basic layout for an individual’s susceptibility to breast cancer. With many more genes being identified, a deeper understanding of breast cancer development and progression together with the ability of gene-based stratification should ultimately lead to improved prevention and an individually tailored therapy to the benefit of each patient. 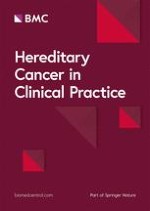 The impact of genetic variants in inflammatory-related genes on prostate cancer risk among men of African Descent: a case control study