We demonstrated that vertebral fractures (VF) are commonly found in early SpA. Patients with VF had lower lumbar BMD than patients without VF. VF remained frequently ‘unrecognized’ and untreated. VF have been associated with more back pain, reduced Qol, and increased risk of future fractures which stresses the importance of recognition also in early stage SpA.

VF are a common complication of long-standing ankylosing spondylitis (AS). However, data of VF in early AS patients and in other spondylarthropathies (SpA) are scarce. Therefore we examined the prevalence of VF in early SpA patients and investigated the associations between VF and demographic and disease-related variables.

SpA patients were included consecutively and radiographs of the spine were made. VF were assessed according to the method of Genant et al.: fractures were defined as reduction of ≥20% of the vertebrae. Descriptive statistics, t-tests and logistic regression analyses were used to study the relationship between VF and demographic and disease-related variables, radiographic damage and BMD.

A total of 113 early SpA patients were included with a disease duration of 7 months, a mean age of 37 years. Seventeen patients (15%) had at least one VF. Fourteen patients had one VF, three patients had two VF. Most VF were located at Th6–Th8. In patients with VF, bone mineral density (BMD) of lumbar spine was lower than BMD of patients without VF (t-test: p = 0.043). Axial Psoriatic Arthritis (PsA) was significantly associated with a higher risk for VF (odds ratio [OR]: 4.62, 95% confidence interval [CI] 1.15–18.58, p = 0.031). No significant associations were found with disease activity variables nor with radiographic severity.

In a group of 113 early, young SpA patients, 15% already had at least one VF. Most VF were asymptomatic, undetected by routine diagnostic procedures and located at the mid-thoracic spine. The VF were associated with low BMD of the lumbar spine and with axial PsA. 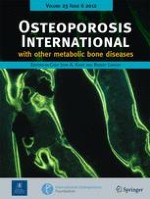 Forearm bone mineral density changes during postpartum and the effects of breastfeeding, amenorrhea, body mass index and contraceptive use