The aim of this study was to estimate the prevalence and factors associated with unprotected receptive anal intercourse (URAI), stratified by age (18–24 or 25 + years old), in a sample of 4,129 MSM recruited by respondent driven sampling in 12 Brazilian cities in 2016. The prevalence of URAI was higher among younger MSM (41.9% vs 29.7%) (p < 0.01). Multivariate analysis indicated that perception of risk, sexual identity, self-rated health status, and having commercial sex were associated with URAI among younger MSM. History of sexual violence, sex with younger partners, having 6 + partners and unprotected sexual debut were associated with URAI among older MSM. Marital status, having stable partner, and reporting sex with men only were associated with URAI in both groups. Despite access to condoms and lubricants, preventive efforts may not be reaching MSM effectively. Age specific intervention approaches, including stigma, discrimination, and perception of risk must be considered. 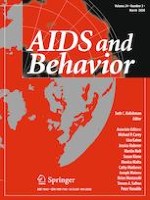 A Mixed Methods Analysis of the Venue-Related Social and Structural Context of Drug Use During Sex Among Male Clients of Female Sex Workers in Tijuana, Mexico

Prevalence and Risk Factors for HIV Infection in a Population of Homosexual, Bisexual, and Other Men Who Have Sex with Men in the Metropolitan Region of Chile: A Re-emerging Health Problem

Do Sexual Partners Talk to Each Other About HIV? Exploring Factors Associated with HIV-Related Partner Communication Among Men and Women in Tanzania

Men’s Beliefs About the Likelihood of Serodiscordance in Couples with an HIV-Positive Partner: Survey Evidence from Rural Uganda