Both BH T1 MRC and Nav T1 MRC improved accuracy and specificity in biliary diagnosis when added to 3D/2D T2 MRC-alone set, though without statistical significance (R1, 82.8% to 93.1%; R2, 82.8% to 89.7%). The added Nav T1 MRC set showed the highest diagnostic confidence with both readers. Both readers scored Nav T1 MRC with the highest visualization scores for branching ducts and overall ducts. 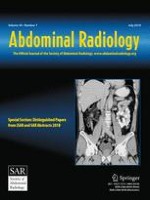 Ultrasound or MR elastography of liver: which one shall I use?

Tardus parvus waveforms in Doppler ultrasonography for hepatic artery stenosis after liver transplantation: can a new cut-off value guide the next step?