In the United States young men who have sex with men have higher rates of substance use, higher HIV incidence, and less frequent HIV testing than their heterosexual counterparts and older MSM. Less is known about comparable populations in Latin America. As part of an epidemiological study, MSM were recruited through Respondent Driven Sampling in the metropolitan area of Buenos Aires, Argentina and answered a computerized behavioral survey. From the total of 500 MSM enrolled, a sub-sample of 233 aged 18–25 was analyzed. The sample was concentrated among lower socioeconomic strata, and only 16% identified as gay. Nearly half reported male, female, and transvestite sexual partners. Reported substance use was widespread ranging from 61% for marijuana to 20% for pasta base (cocaine sulfate). Seventy percent of the sample had never been tested for HIV infection; 3% tested positive for HIV and 8% for syphilis during the study. 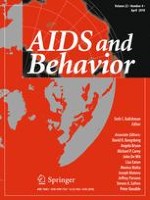 Polydrug Use and Heterogeneity in HIV Risk Among People Who Inject Drugs in Estonia and Russia: A Latent Class Analysis

Association of Cannabis, Stimulant, and Alcohol use with Mortality Prognosis Among HIV-Infected Men