For patients with hip fractures, outcomes can be measured by giving surveys measuring “patient rated outcome measures” (PROMs), performance based measures (PBMS), and objective medical outcomes (e.g., mortality, living situation, resource utilization). This study reviewed articles on hip fracture published in top academic journals, and found that most studies are not reliably using a single set of outcome measures including PROMs, and no single PROM or outcome battery is being used commonly.

Osteoporotic hip fractures are associated with high levels of morbidity, mortality, and cost, while gains in mortality over the past 30 years have been modest. To improve care beyond simple mortality metrics requires identifying and then consistently measuring outcomes that are meaningful to patients and families. The purpose of this study was to review the top-tier hip fracture literature published in the past 30 years to determine if there are consensus outcome measures being routinely used and if the rate of reporting clinically meaningful patient-rated outcome measures is improving over time.

This was a systematic review and meta-analysis on outcome measures reported in osteoporotic hip fractures. Articles were included if they had been published over the last 30 years and were from high impact factor journals. Inclusion criteria were elderly hip fractures, therapeutic or prognostic study, unique and identifiable patients, and included follow-up beyond initial hospitalization. We analyzed study type, inclusion criteria, outcomes reported, and journal specialty orientation.

Three hundred eighty-four articles were included in the final analysis. Sixty-seven percent of the articles were therapeutic studies; 33% were prognostic studies. The average number of patients in each study was 435; the average age was 78 years. The most commonly reported outcome was mortality, and was present in 79% of studies. There was a high degree of heterogeneity in patient-reported outcome measures, with the most popular score (Harris Hip Score) reported only 14% of the time. Only 6% of articles had all components of essential core outcome sets previously defined in the literature.

Despite the apparent advances that have been made in our ability to care for hip fractures, the overall rate of reporting outcomes beyond mortality rate remains low. This lack of consensus represents a major barrier to implementation of value-based care in this patient population.
Anzeige 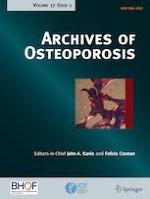 Does hip structural analysis confer additional benefit to routine BMD assessment in postmenopausal women with hip fracture? A study from a tertiary center in southern India

Risk factors of refracture after a fragility fracture in elderly