Epidemiologic evidence on the associations between dietary glycemic index (GI) and glycemic load (GL) and depressive symptoms is not only limited, particularly in Asian populations where dietary GI and GL are typically higher than in Western countries, but also inconclusive. This cross-sectional study examined these associations in Japanese women.

Dietary GI, but not GL, was inversely associated with depressive symptoms in a group of young and middle-aged Japanese women with relatively high dietary GI and GL. 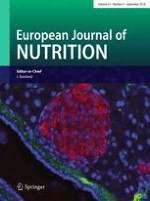 Effect of probiotics and synbiotics consumption on serum concentrations of liver function test enzymes: a systematic review and meta-analysis

Correction to: Challenges in the assessment of total fluid intake in children and adolescents: a discussion paper

Control, perceived control or self-efficacy as confounders in the relation between fruit and vegetable consumption and psychological disorders