Congenital femoral deficiency (CFD) is one of the most challenging and complex conditions for limb lengthening. We focused on the problem of hip instability during femoral lengthening because subluxation and dislocation are potentially catastrophic for hip function.

We assessed for hip stability in 69 children (91 femoral lengthenings) who had CFD Paley type 1a (43 children) and 1b (26 children). The mean age at first lengthening was 6.4 years.

Hip subluxation/dislocation occurred during 14 (15 %) of 91 lengthenings. Thirty-three pelvic osteotomies were performed before lengthening in an attempt to stabilize hips. Thirteen patients (type 1a, eight; type 1b, five) had acetabular dysplasia at initiation of lengthening. One of the eight with type 1a experienced mild femoral head subluxation; four of the five with type 1b experienced three dislocations and one subluxation. Eight patients (type 1b) experienced hip instability although they had pelvic osteotomies. Proximal femoral lengthening was a significant factor for hip subluxation. Patients with hip subluxation more likely underwent monolateral fixation and the original superhip procedure. Age ±six years was not a contributing factor for hip instability. 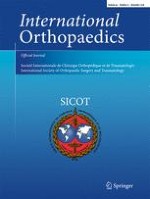 Comparison of transforaminal verse interlaminar epidural steroid injection in low back pain with lumbosacral radicular pain: a meta-analysis of the literature

Is shoulder arthroplasty an option for charcot arthropathy?