Hiring subsidies for people with a disability: do they work? | springermedizin.de Skip to main content
SUCHE MENÜ 1 2 3 4

This article evaluates the effectiveness of hiring subsidies targeted to people with disabilities. By exploiting the timing of implementation among different Spanish regions of a subsidy scheme implemented in Spain during the period 1990–2014, we employed a difference-in-differences approach to estimate the impact of the scheme on the probability of disability insurance (DI) beneficiaries of transiting to employment and on the propensity of individuals of entering the DI program. Our results show that the introduction of the subsidy scheme is in general ineffective at incentivizing transitions to employment, and in some cases it is associated with an increased propensity of transiting to DI. Furthermore, we show that an employment protection component incorporated into the subsidy scheme, consisting in the obligation for the employer to maintain the subsidized worker in employment, is associated with less transitions to permanent employment, more transitions to temporary employment and more transitions to DI, suggesting that these type of employment protection measures can have undesired effects for people with disabilities.
Anzeige 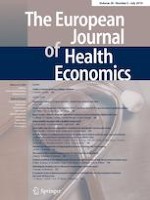 Impact of type 2 diabetes on health expenditure: estimation based on individual administrative data

Demand-side determinants of rising hospital admissions in Germany: the role of ageing