Human nasal epithelial cells (HNECs) from AR patients were stimulated with histamine in the presence or absence of H4R agonist (4-methylhistamine, 4-MH) and antagonist (NJ7777120, JNJ) or H1R agonist (2-pyridylethylamine). TSLP protein was measured by Western blotting and ELISA. To further elucidate the role of H4R in the in vivo situation of experimental AR, rats were sensitized and treated with JNJ or 4-MH. TSLP and OX40 ligand (OX40L) in the nasal mucosa were assayed by Western blotting. Th2 cytokines including interleukin-4, 5 and 13 in nasal lavage fluids were detected by ELISA.

Histamine alone did not induce TSLP production by HNECs. The pre-incubation with 4-MH prior to histamine promoted TSLP expression, which was inhibited by the stimulation with JNJ prior to histamine and 4-MH. The pre-incubation with 2-pyridylethylamine before histamine stimulation had no impact on TSLP production. In AR rats, the levels of TSLP and OX40L protein were increased as well as Th2 cytokines, which was further up-regulated by 4-MH treatment, while JNJ treatment attenuated these effects. 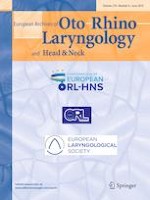