RJ took primary responsibility for the writing of all sections of the paper with the exception of the first section (Forgotten prisoners: global crisis of conditions in detention), which was written by MN. MD was involved in all discussions of the article and provided extensive comments that were integrated in the final version of the article. All authors read and approved the final manuscript. 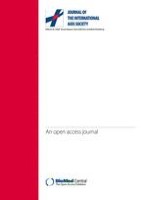 Quality of data collection in a large HIV observational clinic database in sub-Saharan Africa: implications for clinical research and audit of care

HIV infection and sexual risk behaviour among youth who have experienced orphanhood: systematic review and meta-analysis