Osteogenesis imperfecta (OI) is a spectrum of rare genetic disorders characterised by low bone mass, reduced bone material strength, and specific clinical features and inheritance patterns [ 1, 2]. Patients with OI are susceptible to skeletal deformity and fragility throughout their lives. However, they are a heterogeneous group and the severity of their clinical symptoms varies from mild to severe. Their quality of life is lower than that of the general population. Children report being most affected in their physical functioning and school functioning [ 3, 4], while adults report being most affected in their physical functioning [ 5, 6], pain/discomfort, and mobility [ 7].
The management of OI requires a multidisciplinary team of specialists including surgeons, rheumatologists, endocrinologists, paediatricians, and allied health professionals [ 8]. Its treatment is not without complications, and the disease burden for patients and the healthcare system is considerable. Before healthcare services for people with OI can be redesigned to be more effective, efficient, and patient-friendly, the volume and pattern of current activity must be understood. However, information on hospital use by patients with OI is very limited. We therefore aimed to characterise current hospital use by patients with OI in the English National Health Service (NHS).
Anzeige

We analysed routinely collected aggregate data from patients with OI from all 451 hospital trusts in the NHS in England [ 9] from 1 April 2014 to 31 March 2018. We sourced data from the Vantage platform, which was provided by Health iQ in an aggregated format rather than patient-level data.
Secondary care data were taken from the English Hospital Episode Statistics (HES) database produced by the Health and Social Care Information Centre [ 10]. NHS hospital care in England, including community care and mental health services, is managed by hospital trusts. The data extracted reflected inpatient hospital records reported by HES Admitted Patient Care (HES APC). HES APC contains data on all hospital admissions to the NHS and independent sector providers funded by the NHS [ 9]. Hospital admissions are classified as elective or non-elective. Elective admissions are defined as those occurring when the decision to admit and the actual admission happen at different times, such as admissions originating from a waiting list. Non-elective admissions are defined as those that have not been arranged in advance, such as emergency admissions [ 11].
A hospital admission in HES APC is referred to as a “spell” and is defined as an uninterrupted inpatient stay at a particular hospital. Several finished consultant episodes may be included in one spell, when a patient is seen by various consultants during one stay. However, a spell does not include transfers between different hospitals, and a new spell begins if a patient is transferred to another hospital [ 9].
The acquired data files were organised by financial year (starting on 1 April) and were updated monthly. We analysed data from 1 April 2014 to 31 March 2018, corresponding to 4 full financial years.
Anzeige

Aggregate data about admissions reporting International Classification of Diseases-10 (ICD-10) diagnostic code Q78.00 (osteogenesis imperfecta) were retrieved as hospital admissions of patients with OI. Up to 20 ICD-10 codes can be recorded for each admission record, with the first code referred to as the primary diagnosis and the rest as secondary diagnoses. If an OI code was reported as the primary diagnosis, then OI was the main reason for the admission, for instance to provide treatment for the condition. If an OI code was reported as a secondary diagnosis, then the reason for admission was not OI, but the fact that the patient has OI was flagged. We extracted data for both primary and secondary OI diagnoses. Admission records were only accessible in aggregate form, categorised by variables such as financial year, sex, and age group. We did not have access to individual patient follow-up or characterisation beyond these extracted tables. Following NHS Digital guidelines to ensure confidentiality, we used small number suppression, rounding of patient counts, and rounding of admission counts on all outputs.

We extracted number of admissions, number of patients, length of stay (total bed days), waiting time (days from referral date to treatment start date), and costs from the data files provided by the Vantage platform. We report the collected aggregate data categorised by sex, age group, admission method (elective and non-elective), patient classification (day-case, ordinary, and regular), and procedure codes (four-character OPCS codes, a classification of interventions and procedures used by healthcare providers in England).
Day-case was defined as an inpatient elective admission for treatment during the course of the day without staying overnight. Ordinary was defined as an inpatient elective or non-elective admission for treatment and staying for at least one night. Regular was defined as an inpatient elective admission that was part of a planned series of admissions for an ongoing regime of broadly similar treatments, with the patient discharged on the same day [ 12].

We extracted costs directly from the platform as calculated by the data provider. We treated these costs as estimates because they were calculated per spell but retrieved in aggregate form. Reported cost estimates were based on the NHS national tariff according to core Healthcare Resource Group (HRG) codes assigned to each spell. We also included additional costs related to excess bed days for spells with lengths of stay beyond the trim point of the respective HRG code. However, unbundled HRG codes (specific elements of activity and costs separated from core HRGs, such as diagnostic imaging) were not available [ 13]. The reported figures are therefore a conservative estimate of the cost to the NHS, as the NHS reimburses hospitals for the care provided to patients admitted.

Number and costs of admissions

As shown in Fig. 6a, most of the admissions (68%) for patients with a primary OI diagnosis were for a primary procedure classified under chapter X of the classification system, “Miscellaneous Operations”. The next most common procedure chapter, accounting for 12% of admissions, was Z, “Subsidiary Classification of Sites of Operation”. Chapter Z codes are typically used to enhance codes from other chapters by adding information about an operation site or laterality.
×
The procedure responsible for the most admissions (63%) for patients with primary OI diagnosis was “administration of therapeutic substance, including injection, oral, and intravenous administration”, which we identified by searching OPCS procedure codes and descriptions. Of these, 99.7% were procedures included in chapter X (Miscellaneous Operations) and the rest chapter W (Other Bones and Joints).
Chapter X codes (Miscellaneous Operations) accounted for 42% of all costs associated with admissions with primary OI diagnoses. Chapter Z procedure codes (Subsidiary Classification of Sites of Operation) accounted for 25% of costs and chapter W codes (Other Bones and Joints) 13% of costs (Fig. 6b). Thirty-nine percent of all costs were associated with the administration of therapeutic substances.

This study has some limitations. Only “core” HRG codes and excess length of stay were considered when estimating costs. These costs typically capture the bulk of hospital admission costs, but the exclusion of “unbundled” HRGs does result in underestimated total costs.
We had access to inpatient admitted patient care data, but not emergency or outpatient hospital contacts. As patients with OI have an increased risk of fractures, emergency and outpatient admissions are relevant to their healthcare use [ 19]. We could only describe the reason for hospitalisation admissions at a high level, and the procedure codes available were often not detailed enough to identify the specific intervention undertaken. Access to patient-level data and secondary OPCS codes could provide more in-depth information on the reason and content of each admission. We were not able to perform case validation to confirm whether the ICD-10 codes used effectively captured all admissions of patients with OI. Although we identified the codes based on expert clinical opinion and are confident that they identified most relevant admissions, future studies validating these codes are recommended.
This study also has strengths. This is one of the first studies describing the hospital use of patient with OI using routinely collected, real-world data from all NHS-funded hospital admissions in England. Even though OI is a rare disease, using HES data allowed us to analyse all OI-coded admissions anywhere in England paid for by the NHS during 4 financial years. The breadth of our analysis thus offers a detailed picture of inpatient hospital healthcare use and costs for patients with OI, which was not previously available.

The results from this paper highlight the considerable volume of NHS resources currently used to manage patients with OI. This burden could be reduced by reducing non-elective admissions and providing treatment to patients with OI in non-hospital settings. Further research based on patient-level data is needed to better understand the natural history of the disease and its economic burden on the healthcare system so that better decisions can be made to support patients living with OI.

We acknowledge English language editing by Dr Jennifer A de Beyer of the Centre for Statistics in Medicine, University of Oxford.

Descriptive statistics were calculated using Excel.
Open Access This article is licensed under a Creative Commons Attribution-NonCommercial 4.0 International License, which permits any non-commercial use, sharing, adaptation, distribution and reproduction in any medium or format, as long as you give appropriate credit to the original author(s) and the source, provide a link to the Creative Commons licence, and indicate if changes were made. The images or other third party material in this article are included in the article's Creative Commons licence, unless indicated otherwise in a credit line to the material. If material is not included in the article's Creative Commons licence and your intended use is not permitted by statutory regulation or exceeds the permitted use, you will need to obtain permission directly from the copyright holder. To view a copy of this licence, visit http://​creativecommons.​org/​licenses/​by-nc/​4.​0/​. 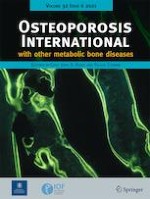 Use of fractal analysis in dental images for osteoporosis detection: a systematic review and meta-analysis

Virtual fracture liaison clinics in the COVID era: an initiative to maintain fracture prevention services during the pandemic associated with positive patient experience