C-reactive protein (CRP) has been suggested as a satisfactory early marker of postoperative complications after colorectal surgery. The aim of this study was to assess the impact of a CRP monitoring-driven discharge strategy, after stoma reversal following laparoscopic sphincter-saving surgery for rectal cancer.

Eighty-eight patients who had stoma reversal between June 2016 and April 2018 had CRP serum level monitoring on postoperative day (POD) 3 and, if necessary, on POD5. Patients were discharged on POD4 if the CRP level was < 100 mg/L. Patients were matched [according to age, gender, body mass index, neoadjuvant pelvic irradiation, type of anastomosis (stapled or manual), and adjuvant chemotherapy] to 109 identical control patients who had stoma reversal between 2012 and 2016 with the same postoperative care but without CRP monitoring.

In patients having temporary stoma closure after laparoscopic surgery for rectal cancer, postoperative CRP monitoring is associated with a significant shortening of hospital stay without increasing morbidity or rehospitalization rates. 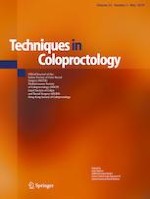 The clinical efficacy of stem cell therapy for complex perianal fistulas: a meta-analysis