Scarce data are available on the effects of hospitalization on oral anticoagulation (OAC) patterns in patients with atrial fibrillation (AF). This study aimed to capture the evolving OAC patterns of patients with known non-valvular AF at high risk for stroke (CHA2DS2-Vasc score ≥ 2 for males and ≥ 3 for females) during hospitalization. A total of 561 eligible patients who were admitted to the cardiology ward of a tertiary hospital were studied. Pre- and post-hospitalization OAC patterns [vitamin-K antagonist (VKA), non-vitamin K oral anticoagulants (NOAC), no OAC], changes between these patterns (initiation, switch, discontinuation, no change) and the respective patient profiles and discharge diagnoses were assessed. During hospitalization, OAC administration increased from 73.1 to 86.6% of patients (p for trend < 0.001). NOAC use increased significantly (42.2–56.1%, p for trend < 0.001), whereas VKA use remained stable (30.8–30.5%). Of patients, 17.3% initiated OAC, 7.1% switched between OACs, 3.7% discontinued OAC treatment, while the rest underwent no change in anticoagulation status. Bleeding risk, use of concomitant antiplatelet therapy and incidence of primary discharge diagnosis of AF or ST-elevation myocardial infarction differed significantly between groups of initiation, switch, discontinuation and no change in OAC therapy. In conclusion, in patients with known AF at high risk for stroke, hospitalization was associated with an increase in OAC uptake, driven mainly by NOAC initiation. Three out of 10 patients initiated, switched or discontinued OAC treatment during hospitalization and this was associated with discrete epidemiologic parameters. 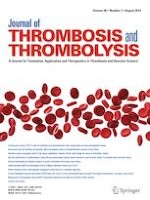 Is citrate theophylline adenosine dipyridamole (CTAD) better than citrate to survey unfractionated heparin treatment? Has delayed centrifugation a real impact on this survey?