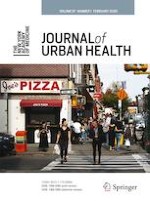 Correction to: Association of Time since Migration from Rural to Urban Slums and Maternal and Child Outcomes: Dhaka (North and South) and Gazipur City Corporations