“How does Austria sleep?” self-reported sleep habits and complaints in an online survey | springermedizin.de Skip to main content
SUCHE MENÜ 1 2 3 4

During the past years, the prevalence of sleep problems has been increasing steadily in industrial societies and represents a major social and socioeconomic burden. The situation in Austria was last evaluated in 2007 by Zeitlhofer and colleagues in a representative sample of 1000 participants. In the current study, we sought to evaluate the sleep behaviour of the Austrian population in an ongoing online survey, in which we have collected data from 986 participants (66% women, mean age 40.9 ± 16.4 years) between March 2018 and May 2019. Sleep duration was appropriate in 52% of the respondents (i.e. 7–9 h per night). However, we found an alarmingly high number of self-reported sleep problems (46%), and only 31% of the participants classified themselves as “good sleepers” using a validated self-report questionnaire (Pittsburgh Sleep Quality Index, PSQI). Furthermore, many participants reported suffering from sleep problems for a very long time (86% > 6 months; 37% > 5 years) suggesting that currently available treatment options are either ineffective or not employed. Possible reasons for sleep problems could include irregular sleep-wake cycles, increased perceived stress levels, and the use of electronic devices just before sleep.
Begleitmaterial
ESM 1 (DOCX 40 kb)
Hinweise

Especially in Western societies, an increasingly high number of people complain about sleep problems. Among clinically relevant sleep disorders, insomnia, which is characterized by problems initiating and maintaining sleep and the feeling of sleep not being restorative, is extremely prevalent. Subjectively, patients suffer from significant distress or impairment in social, occupational or other important areas of daytime functioning. Globally, insomnia is the most commonly reported sleep problem in industrialized countries [1], and numbers seem to have been increasing steadily during the past years [2]. Epidemiological research suggests that its prevalence is between 10 and 35% in the general adult population [3‐6]. Besides subjective suffering, sleep problems are also associated with a significant economic burden resulting from high direct (i.e. due to health-care consultations and treatment) and indirect (i.e. due to absenteeism and loss of productivity) costs [7, 8]. For these numbers to be translated into adequate health-care strategies, it is essential to know about the situation in a specific country. While a study from the Robert Koch Institute [9] presents data from 2010 on the situation among the adult population in Germany, the last appraisal from Austria dates back to 2007 [10]. However, especially given the reported increase in sleep problems during the last years, these numbers are likely to be outdated. Therefore, we opened a web-based survey in March 2018 to obtain a precise appraisal of the sleep quality and sleep habits of the Austrian population. We here present the results of the survey, in which 986 people had participated as of May 2019.

The survey is accessible on www.​sleeplounge.​net and run on LimeSurvey [11], and informed consent was inherent to the study and covered by an ethical framework agreement from the University of Salzburg. The survey included two compulsory questionnaires, namely, (i) the Pittsburgh Sleep Quality Index [PSQI; 12] and (ii) a questionnaire to assess general health and sleep habits [adapted from 10]. The (iii) Morningness-Eveningness Questionnaire [D-MEQ; 13, 14] as well as a (iv) questionnaire on sleep problems and one on the (v) attitude regarding clock change and the use of electronic devices in the evenings were optional. As not all participants filled in all questionnaires, the sample size slightly varies between the different results reported below. Recruitment of respondents was via public relations activities of individual members of the laboratory as well as the University of Salzburg.
Anzeige

A total of 986 people (33.67% men, 66.33% women) had participated in the survey on sleep habits as of May 15, 2019. While all participants lived in Austria, the sample comprised 88% Austrian citizens, and 12% were other nationalities. The sample comprised participants between 15 and 90 years with a mean age of 40.9 years (±16.4 years). About eighty-eight percent were between 18 and 64 years old [general population: 61.8% according to data from Statistik Austria from 2018; 15], and 8.82% were older than 64 years [general population: 18.8% according to data from Statistik Austria from 2018; 15]. In general, a high proportion of participants (data were available from N = 717 participants, who answered the questionnaire on sleep problems) held a university degree (50.63% compared to 20% in the general population between 25 and 64 [16]). In the survey part on sleep problems, 764 people had participated (35.60% men, 64.40% women) with a mean age of 39.1 years (±16.2 years). For the specification of the chronotype, 611 (32.24% men, 67.76% women) respondents had submitted their answers, a total of 267 (33.33% men, 66.67% women) respondents had participated in the clock change questionnaire, and 264 (33.33% men, 66.67% women) had participated in the part about the use of electronic devices before sleep. For more details on the sample, please see Table 1. Please note that although the survey sample may not be representative for the Austrian population, representativeness is difficult to obtain in web-based surveys due to self-selection.
Table 1
Sociodemographic data of all participants
Age distributions are from the sleep habits questionnaire (N = 986), and educational levels as well as information on occupation are from the sleep problems questionnaire (n = 717 of 764 gave information on their occupation)

For between-group comparisons, a Welch two sample t-test was computed. For correlations between two ordinal variables, we report Kendall’s tau, for the correlation between two interval scale variables a Pearson correlation, and for the correlation between an interval scale variable and a dichotomous variable the point biserial correlation. For the analyses of the relationships between two dichotomous variables from fourfold tables, we report results from Chi-square tests. Statistical evaluation was done in R version 3.6.1 [17]. We report p values for statistical tests, all tests were two-sided.

Use of electronic devices before sleep

All procedures performed in studies involving human participants were in accordance with the ethical standards of the institutional and/or national research committee and with the 1964 Helsinki declaration and its later amendments or comparable ethical standards. Informed consent was obtained from all individual participants included in the study.
Open Access This article is licensed under a Creative Commons Attribution 4.0 International License, which permits use, sharing, adaptation, distribution and reproduction in any medium or format, as long as you give appropriate credit to the original author(s) and the source, provide a link to the Creative Commons licence, and indicate if changes were made. The images or other third party material in this article are included in the article's Creative Commons licence, unless indicated otherwise in a credit line to the material. If material is not included in the article's Creative Commons licence and your intended use is not permitted by statutory regulation or exceeds the permitted use, you will need to obtain permission directly from the copyright holder. To view a copy of this licence, visit http://creativecommons.org/licenses/by/4.0/. 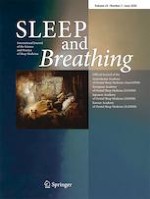 Association between snoring and heart rate variability in adolescents: effects of gender and insufficient sleep

OSA and CPAP therapy: effect of gender, somnolence, and treatment adherence on health-related quality of life

Effects of CPAP on visceral adipose tissue in patients with obstructive sleep apnea: a meta-analysis