We aimed to reveal the effectiveness of the combination of behavioral therapy (BT), drug therapy, and pelvic floor muscle training (PFMT) in patients with the diagnosis of overactive bladder (OAB) who did not respond to drug therapy.

Seventy female patients aged between 18 and 65 years diagnosed with wet-type OAB, who did not respond to drug therapy, were included in our study, which was planned as a prospective randomized controlled trial. The patients were randomly assigned to one of two groups. BT and a combination of anticholinergic + beta3-agonist was implemented in the control group for 12 weeks. BT and PFMT were applied with a combination of anticholinergic + beta3-agonist in the active therapy group for 12 weeks. Post-treatment changes in OAB, ICIQ-SF scores, and frequency and nocturia were compared.

We demonstrated that drug therapy, BT, and PFMT, which are recommended in the first-line treatment of OAB reduce the need for invasive treatments when they are well explained to the patients and combined.
Anzeige 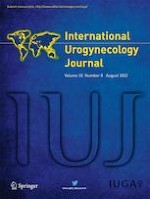 Twisting of transobturator midurethral slings: does it matter?