Eight-millimeter-tip ablation catheters are characterized by poor mapping resolution as they depend on electrode size and spacing. IntellaTip MiFi XP 8-mm (Boston Scientific) catheters offer high mapping resolution due to 3 mini-electrodes (ME) located at the distal tip of the catheter and are dedicated for cavo-tricuspid isthmus (CTI) radiofrequency ablation (RFA). The aim of the study was to evaluate the usefulness, effectiveness and safety of novel IntellaTip MiFi XP catheter for CTI RFA and its ability to localize anatomical structures of the heart.

The study included 10 patients referred for atrial flutter ablation. The 3D mapping system EnSite Velocity was utilized for catheter visualization. The ME signals were used for tricuspid annulus visualization, RF delivery effectiveness assessment defined as ME signal attenuation, and localization of the gaps in the ablation line. The use of ME signals for TV annulus localization resulted in a 13.9 mm (35.5 ± 4.8 mm vs 49.4 ± 7.8 mm; p < 0.01) shorter ablation line in comparison with the potential ablation line designed using standard bipol. The ablation endpoint, bidirectional block, was achieved in all 10 cases (100%) and lasted for at least 15 min after the last RF delivery. The ablation endpoint was reached after 5.1 ± 1.67 RF applications. The total RF time was 220 ± 61 s. Total procedure time was 66 ± 13.5 min, fluoroscopy time 3.92 ± 4.21 min, and total fluoroscopy dose 40.3 ± 56.5 mGy.

In 3 out of 10 cases, there was a need of filling the gap with 1–2 additional applications after the first linear lesion set. No additional RF applications were required at the annular end of the ablation line. The indirect comparison with previously conducted studies using a standard 8-mm ablation catheter shows that the studied catheter has at least the same or even better performance.

The use of the novel IntellaTip MiFi XP may help to avoid unnecessary RF application especially at the annular part of cavo-tricuspid isthmus and enables a purely electrophysiological approach to atrial flutter ablation, as high-resolution ME signals help to understand local electrophysiological phenomena. 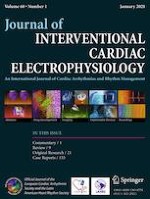