The ability of acute lymphoblastic leukemia (ALL) blasts to mediate costimulatory signals during T-lymphocyte activation was investigated in an experimental model in which monoclonal T-cell populations were stimulated with standardized activation signals (anti-CD3 and anti-CD28 monoclonal antibodies; phytohemagglutinin, PHA). Leukemia cells from 12 consecutive ALL patients with high peripheral blood blast counts were studied. Proliferative T-cell responses were detected for a majority of these patients when irradiated leukemia blasts were used as accessory cells during activation. T-cell cytokine release was also observed for most patients when using nonirradiated ALL accessory cells. Low or undetectable cytokine levels were usually observed for CD8+ clones, whereas the CD4+ clones often showed a broad cytokine response with release of interleukin-2 (IL-2), IL-4, IL-10, IL-13 and interferon γ(IFN-γ) in the presence of the ALL accessory cells. ALL blasts were also able to function as allostimulatory cells for normal peripheral blood mononuclear responder cells. However, both T-cell proliferation and cytokine release showed a wide variation between ALL patients. The accessory cell function of ALL blasts showed no correlation with the release of immunomodulatory mediators (IL-2, IL-10, IL-15) or the expression of any single adhesion/costimulatory membrane molecule (CD54, CD58, CD80, CD86) by the blasts. We conclude that for a majority of patients, native ALL blasts can mediate costimulatory signals needed for accessory cell-dependent T-cell activation, but differences in costimulatory capacity between ALL patients affects both the proliferative responsiveness and cytokine release by activated T cells. 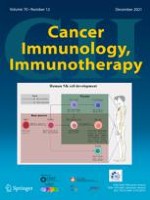 Bcl-2 expression in metastatic malignant melanoma. Importance for the therapeutic efficacy of biochemotherapy