Sinonasal inverted papilloma (SNIP) is a benign but locally aggressive tumor that has a tendency for recurrence and malignant transformation. The role of human papillomavirus (HPV) in SNIP is controversial. To determine the HPV-DNA prevalence and type distribution in SNIP in two different geographic areas and assess the association between SNIP recurrence and HPV infection, as well as additional potential etiologic factors. Two retrospective cohorts of SNIP patients from Poland and Spain were evaluated. Demographic, tobacco/alcohol use, clinical, and follow-up data were collected. All samples were subject to histopathologic evaluation, DNA quality control, and HPV-DNA detection by PCR. HPV-DNA positive samples and a random sample of HPV-DNA negative cases were further subject to p16INK4a analysis. Proportional-hazards models were used to evaluate the risk of recurrence by selected variables. Seventy-nine SNIP patients (46 from Spain diagnosed between 1995 and 2014, and 33 from Poland diagnosed between 2012 and 2017) were included in the study. HPV-DNA was detected in four patients (5.1%), two from each region, and all four were positive for the HPV11 subtype. Seventeen patients (21.5%) experienced recurrence, with a median time to recurrence of 14 months. No association was identified between lesional HPV-DNA positivity, toxic habits, Krouse stage, or malignant transformation and a higher risk of recurrence. The low prevalence of HPV-DNA in SNIPs suggests that HPV is not a main etiology for development of these lesions. With a lack of association between the evaluated factors and recurrence, further research with larger number of patients and additional biomarkers is warranted to further understand predisposing risk factors. 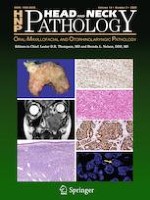 Cervical Myxoid Solitary Fibrous Tumor: Report of an Unusual Variant and a Brief Overview of the Literature