To report the technique of hydrodissection of the gallbladder bed, in order to separate the gallbladder wall from the liver surface during microwave ablation of liver malignancies located in segment V.

Hydrodissection of the gallbladder fossa was technically feasible in all four procedures, and microwave ablation was performed at maximum power without any early interruption. Time to perform hydrodissection was 11.3 min on average (range 7–18 min). Minimal distance between the ablation area and the GB increased from virtual to 10 mm on average (range 6–13), with a mean volume of dissection of 65 ml (range 40–100). Technical success was 75%. There was no complication related to the hydrodissection itself, and no acute or delayed gallbladder complication. 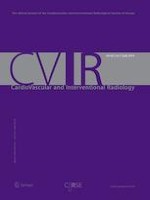