Hymenoptera sting reactions are among life-threatening causes of allergy. Several epidemiology studies have assessed the risk of these kind of reactions, among the general population, around 3% of adults. This incidence increases among highly at risk populations such as outdoor workers. Hymenoptera stings among forestry workers (FW) are occupational triggers but it has not yet been well defined which is the real incidence of anaphylaxis in these workers, not even in Italy. Two Italian studies reported on the risk of hymenoptera stings (HS) in northern Italy (NI) and central Italy (CI) FW while no data is available on the prevalence in southern Italy (SI) ones.

A population of 341 SI FW (301 males and 40 females, mean age 51 years, range 43–63 years), who worked in Sicily, was investigated submitting a standardized questionnaire dealing with reactions to Hymenoptera stings, such as large local reactions (LLR) and systemic reactions (SR). 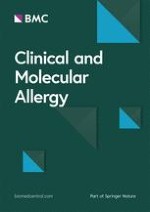 Tryptase as a marker of severity of aortic valve stenosis

Focus on the agents most frequently responsible for perioperative anaphylaxis