Topical anticholinergics have been reported to be effective in managing hyperhidrosis (HH) given the recent approval of glycopyrronium tosylate.

This review aimed to examine the effectiveness of emerging topical anticholinergic treatments for HH and their associated adverse effects in comparison to current treatment options.

We conducted a search within the PubMed and Embase databases for current and emerging topical anticholinergic treatments for primary HH.

The topical anticholinergics that have been recently investigated for use in HH include glycopyrrolate, oxybutynin, sofpironium bromide, and umeclidinium. The only agent currently FDA approved is glycopyrrolate.

Primary hyperhidrosis (HH) is the presence of increased sweating in the absence of a physiological trigger or underlying identifiable pathological cause. It is due to the over activity of the reflex circuits stimulating the eccrine glands [1]. There is no increase in the number of eccrine glands as once speculated [2]. Excessive sweating is primarily found in focal body regions such as the palms, axilla, soles of feet, or craniofacial region [3]. HH is often a disregarded condition that can have a significant debilitating impact on patients’ psychosocial functioning owing to its persistent nature [4]. It can cause limitations to work, social interactions, relationships, and quality of life. In addition to discomfort, skin maceration from persistent moisture can lead to bacterial and/or fungal overgrowth. Treatment options are based on anatomic location and severity of HH. It ranges from topical and systemic treatments, botulinum toxin, iontophoresis, radiofrequency microneedling, microwave thermolysis, and surgical procedures [5]. Topical anticholinergics are useful medications in the treatment of HH and are often favored given the decreased risk of anticholinergic effects compared with oral anticholinergics. Anticholinergic agents work by inhibiting the acetylcholine-induced activation of eccrine sweat glands [6]. Glycopyrronium tosylate (GT) 2.4%, a quaternary amine, is a towelette premoistened with glycopyrronium that is applied topically and is currently the only topical anticholinergic approved in the USA for primary axillary HH [7].
Anzeige
However, even with the range of available therapies, patients are often recalcitrant to treatment and/or discontinue treatment owing to unpleasant side effects. The formulation of topical anticholinergics is expected to minimize the unpleasant side effects associated with systemic anticholinergics. This review aimed to investigate the data available on the effectiveness of emerging topical anticholinergic treatments for HH and the extent of associated side effects.

A literature search was performed using the PubMed database with the keywords “primary hyperhidrosis” and “topical anticholinergics.” The specifics of article selection and exclusion criteria are detailed in Fig. 1. Primary outcomes focused on safety and tolerability. This article is based on previously conducted studies and does not contain any new studies with human participants or animals performed by any of the authors.
×

Forty articles met the inclusion criteria of topical anticholinergics as a treatment for primary HH in the adult population and were included in the review.

Historically, the current approach for management of primary HH includes first-line therapy of topical antiperspirants (aluminum chloride hexahydrate or other aluminum salts) and/or lifestyle modifications [5]. Aluminum chloride works through the production of its metal salts that interact with sweat mucopolysaccharides forming precipitates that block the eccrine sweat gland duct lumen [37]. Lifestyle modifications include avoiding HH triggers such as spicy foods, alcohol, crowded areas, and emotional arousal [37]. Tight clothing and occlusive footwear can also worsen symptoms and therefore avoidance is recommended. Another treatment, iontophoresis, is a long-term treatment for palmar and plantar HH. Iontophoresis involves placing the affected area in tap water while delivering an electrical current through intact skin [5]. This treatment has been speculated to inhibit sympathetic nerve transmission, obstruct sweat glands by ions, and cause dysfunction of eccrine gland secondary pH alterations [38].
Anzeige
Procedural therapeutic options generally range from less invasive to more invasive options, such as botulinum toxin A (BTX) injections, surgical curettage, and, for severe refractory cases, endoscopic sympathectomy [34]. BTX inhibits acetylcholine release and works by temporarily blocking eccrine sweat gland function. However, the significant pain associated with injections is often a limiting factor. Nasser et al. investigated modalities to relieve pain associated with BTX injections and concluded that nerve blocks, intravenous regional anesthesia, and needle-free anesthesia are great options for anesthesia [39]. The issue is that these options required specialized training and equipment. Alternative less effective options for pain control include ice application, topical anesthesia, vibration, and cryoanalgesia [39]. Originally, it was once thought that topical anticholinergics should be considered when a patient has failed all other nonsurgical treatments [40]. However, currently in many countries, the initial treatment for HH in clinical practice is oral oxybutynin. More recently, systemic anticholinergic agents such as oral oxybutynin and glycopyrrolate have been shown to be beneficial; however, there is an increased risk of systemic adverse effects [34]. Those symptoms include dry mouth, blurred vision, headache, dizziness, and gastrointestinal complaints. Therefore, new topical anticholinergics have been studied and were found to provide comparable efficacy with a reduction in unpleasant side effects [34].

No funding or sponsorship was received for this study or publication of this article.

All named authors (Nikita S. Wong, MS, Taylor M. Adlam, MD, Geoffrey A. Potts, MD and Mehdi Farshchian, MD, PhD) take responsibility for the integrity of the work as a whole, and have given their approval for this version to be published.

All named authors (Nikita S. Wong, MS, Taylor M. Adlam, MD, Geoffrey A. Potts, MD and Mehdi Farshchian, MD, PhD) contributed to the conception and design of this work. All authors contributed to writing the first draft and commented on previous versions of the manuscript. All authors read and approved the final manuscript.

This article is based on previously conducted studies and does not contain any new studies with human participants or animals performed by any of the authors. 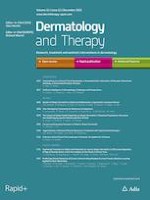 Dupilumab Treatment in Adults with Moderate-to-Severe Atopic Dermatitis is Efficacious Regardless of Age of Disease Onset: a Post Hoc Analysis of Two Phase 3 Clinical Trials

Characteristics of Giant Nodular Melanomas in Special Locations: a Case Series and Review of the Literature