The effect of hyperglycaemia with and without additional insulin was explored at a low and high intensity of exercise (40% vs 70% VO2peak) on glucose utilization (GUR), carbohydrate oxidation, non-oxidative glucose disposal (NOGD), and muscle glycogen.

Eight healthy trained males were exercised for 120 min in four trials, twice at 40% VO2peak and twice at 70% VO2peak, while glucose was infused intravenously (40%G; 70%G) at rates to “clamp” blood glucose at 10 mM. On one occasion at each exercise intensity, insulin was also infused at 40 mU/m2/per min (i.e. 40%GI and 70%GI). The glucose and insulin infusion began 30 min prior to exercise and throughout exercise. A muscle biopsy was taken at the end of exercise for glycogen analysis.

Hyperinsulinaemia in the presence of hyperglycaemia during both low- and high-intensity exercise promotes GUR and NOGD, but does not significantly affect substrate oxidation. 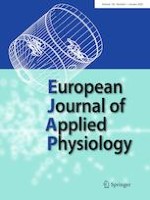 The energy cost of swimming and its determinants