Rheumatoid arthritis (RA) is one of the most prevalent chronic inflammatory diseases and an autoimmune disease that affects the synovial joints [ 1]. In Japan, the incidence rate was 0.08 per 1000 person-years between 1985 and 1996 [ 2]. The prevalence apparently declined between 1965 and 1996 (2.4 to 1.7 per 1000 persons) [ 2]. Although the etiology of RA is still unclear, it is accepted as a multifactorial disease. Genetic and environmental factors, and their interactions, might contribute to the development and expression of the disease [ 3].
Herpes zoster (HZ) is caused by the reactivation of the latent varicella-zoster virus dormant in the sensory ganglia [ 4]. HZ is known to be more frequent in patients with conditions that depress cell-mediated immunity such as malignancy, immunosuppressive disorders, and treatment with immunosuppressants [ 5]. In a previous study using a large US database and UK database, the risk of HZ was increased twofold in patients with RA compared with patients without RA [ 6]. A US population-based cohort study also showed that the cumulative incidence of HZ was higher in the RA patients than the non-RA subjects between 1980 and 2008: the cumulative incidence rates of HZ for RA patients and non-RA subjects were 12.1 and 5.4 per 1000 person-years, respectively [ 7]. In Japan, a cohort study of RA patients reported that the incidence rate of HZ was 6.66 per 1000 person-years during 5-year follow-up until 2013 [ 8]. According to a recent systematic review in 2019 in patients with autoimmune inflammatory rheumatic diseases, the pooled incidence rate of HZ among RA patients was 11.6 per 1000 person-years [ 9]. The medications used to treat RA that modulate the immune system might affect the development of HZ in patients with RA. In studies concerning the risk factors for HZ among patients with RA, RA medications such as biological disease-modifying anti-rheumatic drugs (bDMARDs), corticosteroids, or methotrexate (MTX) have been compared for their effect on the development of HZ [ 7, 10, 11]. Recently, RA management has dramatically changed [ 12, 13]. Such alteration of treatment strategies might affect clinical circumstances in RA patients, including the risk of developing HZ. Newer information is needed in regard to this issue.
Anzeige
Besides immunosuppressive conditions, advanced age, female sex, and white skin are considered as potential risk factors for HZ; however, there is still a lack of information regarding other risk factors for HZ [ 14]. Some previous studies indicated that chronic medical conditions contribute to the development of HZ [ 15‐ 17]. Because chronic medical conditions such as hypertension, dyslipidemia, and diabetes mellitus (DM) are widely prevalent in RA patients [ 18, 19], it is possible that those chronic medical conditions might also be risk factors for HZ in patients with RA. To develop prevention strategies for HZ in the future in subjects with suppressed immunity, it is meaningful to identify conditions that might affect the development of HZ. Currently, other than RA-related factors such as disease activity or medications, only advanced age is identified as a risk factor for HZ among RA patients [ 7‐ 10, 20, 21].
The purpose of this study was to estimate the incidence rate of HZ in patients with RA using a large-scale multicenter medical information database in Japan. In addition, we aimed to examine the associations between three medical conditions (hypertension, dyslipidemia, and DM) and the risk of HZ in patients with RA.

The present study was carried out using the medical database managed by Medical Data Vision (MDV) Co., Ltd., in Tokyo, Japan. The commercial health database included records of 19 million patients as of August 2017. The data from participating healthcare institutions were anonymized before transfer to MDV. The database is composed of integrated medical claims, pharmacy claims, and Diagnosis Procedure Combination (DPC) data [ 22], and includes the data of both inpatients and outpatients from about 18% of all acute medical care hospitals in Japan.
For the present study, the research dataset ( n = 221,196) consisted of the records (including a disease history sheet and a clinical action sheet) of potential target patients (patients with the Tenth Revision of the International Statistical Classification of Diseases and Related Health Problems [ICD-10] codes related to RA: M05 and M06) extracted between April 1, 2008 and August 31, 2017 from the MDV database. The study protocol was approved by the ethics committee of Ehime University Graduate School of Medicine (No. 1709001). According to the Ethical Guideline for Epidemiological Research issued by the Japanese Ministry of Health, Labor and Welfare, written informed consent does not apply to anonymized data. Therefore, the requirement for written informed consent was waived for this analysis.
Anzeige

In the present study, when patients in our research dataset had the first RA diagnosis on or after April 1, 2008, the earlier of the two dates (A) and (B) was defined as the index date: (A) the date of the first RA diagnosis and (B) the date of the first prescription of anti-rheumatic drugs (except NSAIDs, anti-rheumatic medicine are listed in Supplementary file, Table S1). Our research dataset also included patients who had the first RA diagnosis before April 1, 2008. In such patients, the index day was set at April 1, 2008 (C). However, because the date of birth was not recorded in the disease history sheet, age on the index day was unknown regardless of the index date (A), (B), or (C). To identify the patient’s age on the index day, the year and month of birth of the patients was estimated using the prescription history in clinical action sheets collected between April 1, 2008 and August 31, 2017. Since a clinical action sheet included the age at the beginning of the month at the time of issuance of the medical fee claim, the month of birth could be identified as the month in which the age on the clinical action sheet increased by 1 year. Nevertheless, 833 patients whose age could not be estimated were excluded from the present study.
Patients were included if they met all the following criteria: (1) having an estimated age at index date of ≥ 18 years; (2) having a follow-up period of at least 180 days after the index date prior to the last date of data availability; (3) having at least two outpatient diagnoses of RA (ICD-10 codes: M05 or M06) during the follow-up period.

The incidence rate of HZ was calculated as the number of events per 1000 patient-years. Logistic regression models were used to assess the association between medical conditions and the risk of HZ. In the multivariate analysis, the odds ratios (ORs) were adjusted for age at the index date, sex, hospital size (< 200, 200–499, and ≥ 500 beds), and use of conventional synthetic DMARDs (csDMARDs), bDMARDs, targeted synthetic DMARDs (tsDMARDs), MTX, and steroids (< 5 and ≥ 5 mg/day). All statistical analyses were performed using the SAS software package version 9.4 (SAS Institute, Inc., Cary, NC, USA). Two-sided p values < 0.05 were considered statistically significant.

The authors would like to acknowledge the ASCA Corporation ( https://​www.​asca-co.​com/​), which is an expert provider of English language editing services.

The study protocol was approved by the ethics committee of Ehime University Graduate School of Medicine (No. 1709001).
Open AccessThis article is licensed under a Creative Commons Attribution 4.0 International License, which permits use, sharing, adaptation, distribution and reproduction in any medium or format, as long as you give appropriate credit to the original author(s) and the source, provide a link to the Creative Commons licence, and indicate if changes were made. The images or other third party material in this article are included in the article's Creative Commons licence, unless indicated otherwise in a credit line to the material. If material is not included in the article's Creative Commons licence and your intended use is not permitted by statutory regulation or exceeds the permitted use, you will need to obtain permission directly from the copyright holder. To view a copy of this licence, visit http://​creativecommons.​org/​licenses/​by/​4.​0/​.

Below is the link to the electronic supplementary material.
Supplementary file1 (DOCX 26 KB) 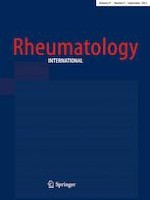 Arthritis in the hands of saints

The association between alcohol consumption and osteoarthritis: a meta-analysis and meta-regression of observational studies

Microbiome–miRNA interactions in the progress from undifferentiated arthritis to rheumatoid arthritis: evidence, hypotheses, and opportunities

The coexistence of IgA vasculitis and tuberculosis: a case-based review