To prospectively investigate the role of re-irradiation (re-RT) combined with hyperthermia (HT) in a contemporary cohort of patients affected by recurrent breast cancer (RBC).

Within the prospective registry HT03, patients with resected RBC and previous irradiation were included. Re-RT was applied to the recurrence region with doses of 50–50.4 Gy, with a boost up to 60–60.4 Gy to the microscopically or macroscopically positive resection margins (R1/R2) region. Concurrent HT was performed at 40–42 ℃. Primary endpoint was LC. Acute and late toxicity, overall survival, cancer-specific survival (CSS), and progression-free survival (PFS) were also evaluated.

20 patients and 21 RBC were analyzed. Median re-RT dose was 50.4 Gy and a median of 11 HT fractions were applied. Re-RT+HT was well tolerated, with three patients who experienced a grade (G) 3 acute skin toxicity and no cases of ≥G3 late toxicity. With a median follow up of 24.7 months, two local relapses occurred. Ten patients experienced regional and/or distant disease progression. Five patients died, four of them from breast cancer. PFS was favorable in patients treated with re-RT+HT for the first recurrence with doses of 60 Gy. A trend towards better CSS was found in patients with negative or close margins and after doses of 60 Gy.

Full-dose re-RT+HT for RBC is well tolerated, provides good LC, and seems to be more effective when applied at the time of the first relapse and after doses of 60 Gy. The registry will be continued for validation in a larger cohort and with longer follow-up. 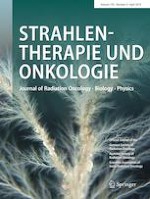 Reply to the letter to the editor “Comment to ‘Impact of postmastectomy radiotherapy on the outcomes of breast cancer patients with T1-2 N1 disease; an individual patient data analysis of three clinical trials’”