We investigated whether ventilation volumes affected arterial blood sevoflurane concentration (A sev) and its uptake into the body during general anesthesia.

Hyperventilation accelerated the rate of A sev increase immediately after sevoflurane administration, which was time dependent with respect to different alveolar ventilation levels. 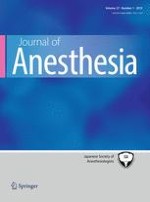 Strategies for difficult airway management—the current state is not ideal