The online version of this article (doi:10.​1007/​s11420-016-9518-4) contains supplementary material, which is available to authorized users.
Level of Evidence: Prognostic Level III.

Obesity is an established risk factor for complications after total knee arthroplasty (TKA) and is often associated with malnutrition.

1. What is the prevalence of hypoalbuminemia in obese patients undergoing TKA? 2. What is the independent morbidity risk of malnutrition relative to obesity?

TKA cases were identified from the National Surgical Quality Improvement Program from 2005 to 2013. Propensity scores for having preoperative albumin measurements were calculated using demographics, BMI, and modified Charlson Comorbidity Index (CCI). Malnutrition was defined as hypoalbuminemia (<3.5 g/dL). Patients were classified by BMI as follows: non-obese (18.5–29.9), obese I (30–34.9), obese II (35–39.9), or obese III (≥40). Postoperative complications were compared across obesity and nutritional statuses. Multivariable propensity-adjusted logistic regressions were performed to determine associations between malnutrition, obesity, and 30-day outcomes.

There were 71,599 cases identified, with 34,800 (48.6%) having albumin measurements. Propensity score adjustment adequately accounted for selection bias, with adjusted p > 0.05 for observable characteristics. Malnutrition prevalence increased with BMI (6.1% in obese III vs. 3.7% in non-obese). With propensity-adjusted multivariable analysis, obese III was the only obesity class associated with any complication, wound complication, and reoperation. Hypoalbuminemia was a stronger and more consistent independent risk factor, for any complication, wound, cardiac, or respiratory complications, and death.

Hypoalbuminemia is a more consistent independent predictor of complications after TKA than obesity. Strategies for medical optimization of these conditions should be investigated. 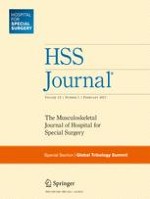 Corrosion of the Head-Stem Taper Junction—Are We on the Verge of an Epidemic?

Design Considerations for the Next Generation Hip Resurfacing Implant