The aim of this study was to evaluate the relationship of hyposmia in Parkinson’s disease (PD) with other motor and non-motor symptoms and with the degree of nigrostriatal dopaminergic cell loss. A total of 295 patients with a diagnosis of PD were included. Olfactory function was measured using the University of Pennsylvania Smell Identification Test (UPSIT). Motor symptoms were rated using the Unified Parkinson’s Disease Rating Scale motor subscale (UPDRS III). To evaluate other non-motor symptoms, we used the Mini-Mental State Examination (MMSE) as a measure of global cognitive function and validated questionnaires to assess sleep disturbances, psychiatric symptoms, and autonomic dysfunction. A linear regression model was used to calculate correlation coefficients between UPSIT score and motor and non-motor variables [for psychiatric symptoms a Poisson regression was performed]. In a subgroup of patients (n = 155) with a dopamine transporter (DaT) SPECT scan, a similar statistical analysis was performed, now including striatal DaT binding. In the regression models with correction for age, sex, disease duration, and multiple testing, all motor and non-motor symptoms were associated with UPSIT scores. In the subgroup of patients with a DaT-SPECT scan, there was a strong association between olfactory test scores and DaT binding in both putamen and caudate nucleus. Hyposmia in PD is associated with various motor and non-motor symptoms, like cognition, depression, anxiety, autonomic dysfunction and sleep disturbances, and with the degree of nigrostriatal dopaminergic cell loss. This finding adds further confirmation that hyposmia holds significant promise as a marker of disease progression. 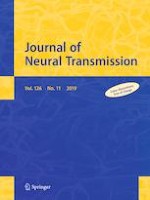