Identification and management of Lynch syndrome in the Middle East and North African countries: outcome of a survey in 12 countries | springermedizin.de Skip to main content
TOOLBAR 1 2 3 4
SUCHE MENÜ 1 2 3 4

Colorectal cancer (CRC) is the third most commonly diagnosed cancer worldwide and the fourth leading cause of cancer-related death [ 1]. Although the incidence of CRC in Middle Eastern and North African (ME/NA) countries is low compared to Western countries [ 2], recent reports suggest that it is increasing rapidly [ 3].
One option for prevention of CRC is offering surveillance to individuals at high risk of inherited CRC. The most common hereditary form of CRC is Lynch syndrome (LS), which is responsible for 3% of all cases of CRC [ 4]. LS is an autosomal dominant disorder caused by a pathogenic variant in one of the mismatch repair (MMR) genes, which include MLH1, MSH2 (EPCAM), MSH6 and PMS2. Loss of MMR function leads to the molecular phenotype of microsatellite instability (MSI) in tumours, which in turn drives carcinogenesis [ 4].
Anzeige
LS is characterized by a very high risk of developing CRC and endometrial cancer. The risk of developing a metachronous CRC is also high in Lynch syndrome individuals, therefore such patients should be offered a more extensive surgical treatment compared to sporadic CRC patients. LS families also show other cancers including cancers of the urinary tract, ovaries, stomach, pancreas, biliary tract, skin and cancers of the brain. Cancer risks and the spectrum of tumours depends on the type of underlying pathogenic variant [ 5]. The molecular phenotype of MSI characteristic for LS-associated tumours can be identified by PCR fragment length analysis of microsatellite markers or immunohistochemical (IHC) analysis of the MMR proteins. The diagnosis is confirmed by analysis of germline DNA.
Several studies have demonstrated that periodic examination of the colon leads to an improved prognosis and a substantial decrease in mortality [ 6, 7]. Identification of LS and the participation of families in surveillance programs is therefore of paramount importance.
In 2017, at a conference of the Palestinian Society of Gastroenterology in Jericho, a new network of doctors interested in hereditary CRC in ME/NA countries was established, now referred to as the Hereditary Colorectal Cancer Network-Middle East (HCCN-ME) [ 8]. The main goal of this network is to improve care for individuals with inherited CRC in these countries. In order to reach this goal, we first need a picture of current management of LS in the region. Thus, the aim of the present study was to survey the state of LS healthcare in ME/NA countries.

Our first task was to develop a questionnaire that addresses the most relevant issues (Supplementary file 1).The questionnaire contains three categories of questions: (1) general questions about the availability of guidelines for diagnosis and management of LS in each country, including questions concerning the attention paid by physicians to family histories of CRC (cancer), (2) questions about the genetic services available for the identification and diagnosis of LS, and (3) questions that assess general knowledge of the clinical management of LS patients.
Anzeige
All members of the network, and authors of recent articles on LS from ME/NA or neighbouring countries, were invited to participate in the survey. The invitation mail contained a link to the online questionnaire (developed using SurveyMonkey). The respondents came from 12 countries in the ME/NA region.

A total of 22 (40%) out of 55 professionals invited to participate in the survey responded. Three participants were excluded because they completed too few questions. The remaining 19 respondents were from twelve countries, including Algeria, Azerbaijan, Cyprus (two respondents), Egypt, Iran (two respondents), Jordan, Kuwait (two respondents), Lebanon, Morocco, Palestine (four respondents), Tunisia (two respondents), and Turkey (Table 1).
Table 1
Countries involved in the survey, including population (millions) ( https://​data.​worldbank.​org/​)
The respondents included eight clinical/molecular geneticists, four gastroenterologists, one surgeon, one researcher, one specialized nurse, one paediatrician, two biological scientists and one pathologist. Twelve of the 19 respondents were affiliated to a University Medical Centre.
The survey revealed that guidelines for the diagnosis and management of LS were available in three countries. In two countries, the respondents were unaware of clinical guidelines in their country. In five countries, most doctors pay appropriate attention to family history of CRC.
Genetic services were available in a research setting in one country, in only a few hospitals in six countries, in several hospitals in three countries and were absent in two countries. The most common explanation for the limited availability of these services was lack of funds in five countries, lack of interest or knowledge in four countries and a lack of trained geneticists in one country.
Where genetic services were available, pedigree analysis was offered in ten countries, genetic counselling in eight countries, IHC or MSI-analysis in eight countries, MLH1-promotor methylation or BRAF-analysis of tumours (performed to exclude methylation of the MLH1-promotor as cause of loss of MMR-function) in eight countries and (Sanger) sequencing or Next Generation Sequencing (NGS) in ten countries.
Clinical criteria were used for the identification of LS in eight of the 12 countries, while systematic screening of tumours was offered in only one country (i.e., Cyprus). Respondents from almost all countries (11 out of 12) stated that most LS families go unidentified in their country. By contrast, the respondent from Turkey reported that most LS patients in that country were identified.
With respect to the management of LS, colonoscopic surveillance is offered in 11 out of 12 countries and surveillance of the endometrium in five of the 12 countries. As regards the less common cancers observed in LS, surveillance of the urinary tract is offered in three countries and upper GI tract in five countries. Assessment of H.pylori infection was performed in four of the 12 countries. Extended surgery (subtotal colectomy) for CRC diagnosed at < 50–60 years was an option in six of the 12 countries. A registry of families with Lynch syndrome was available in seven out of the 12 countries. The replies to five questions have not been shown because most respondents did not have information about the issue that was addressed. The outcome of the survey is summarized in Table 2.
Table 2
Main outcomes from survey on current Lynch syndrome healthcare in the Middle East, North African and neighbouring countries
Anzeige

The authors declare that they have no conflict of interest.
Open AccessThis article is licensed under a Creative Commons Attribution 4.0 International License, which permits use, sharing, adaptation, distribution and reproduction in any medium or format, as long as you give appropriate credit to the original author(s) and the source, provide a link to the Creative Commons licence, and indicate if changes were made. The images or other third party material in this article are included in the article's Creative Commons licence, unless indicated otherwise in a credit line to the material. If material is not included in the article's Creative Commons licence and your intended use is not permitted by statutory regulation or exceeds the permitted use, you will need to obtain permission directly from the copyright holder. To view a copy of this licence, visit http://​creativecommons.​org/​licenses/​by/​4.​0/​.

Below is the link to the electronic supplementary material.
Supplementary file1 (PDF 106 kb) 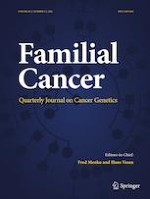