The main objective in the treatment for fistulas, passing though the upper or middle third of the external anal sphincter, is healing of the fistula without subsequent damage to both sphincters. Although transanal advancement flap repair (TAFR) provides a useful tool for achieving this goal, fistula healing fails in one out of every three patients [ 1– 8]. Several studies have been conducted to identify factors affecting the outcome of TAFR. However, until now, no definite factor predisposing to failure has been determined.
In 1995, Lunniss et al. [ 9] observed epithelium lining the intersphincteric fistula tract in 13 out of 18 patients with a low perianal fistula. Though the effect of this epithelialization on fistula healing was not assessed, the authors stated that this might be a cause for the persistence of the fistula. This hypothesis is still generally accepted, and this study is cited in many papers and text books [ 10– 13].
Anzeige
Recently Van Koperen et al. [ 14] also assessed the presence of epithelium in fistula tracts. In 18 patients with a low transsphincteric fistula they took biopsies at three different locations, on the side of the internal opening, in the middle of the fistula tract, and near the distal end close to the external opening. Epithelium was predominantly found near the internal opening. In the other parts of the fistula tract, epithelialization was found to be rare. According to these authors epithelialization might contribute to the failure of healing, although they did not provide evidence for this statement.
The aim of the present study was to assess the prevalence of epithelialization of the fistula tract and to study the effect of epithelialization on the healing rate.

Patients with a rectovaginal fistula or a fistula due to Crohn’s disease were excluded from the present series.
Anzeige

All patients were immobilized for 5 days. All patients received a clear liquid diet for 5 days. During this time period, metronidazole and cefuroxime were administered intravenously three times daily.

After fixation in 10% formalin, the 53 specimens were cut in sections. These sections were strained using the routine hematoxylin and eosin staining method. Pan keratin antibodies were used for the detection of keratins, which are intermediate filament proteins expressed mainly in epithelial cells. The histopathological examination of the fistula tract was carried out by a pathologist, blinded for clinical data.

Comparison of the changes between groups was conducted using the Fisher’s exact probability test. The limit of statistical significance was set at P = 0.05.

In contrast to what is generally accepted, most perianal fistulas are not lined with epithelium. Moreover, the presence of epithelium lining does not affect the outcome after TAFR.
Anzeige

The authors declare that no conflict of interest exists. 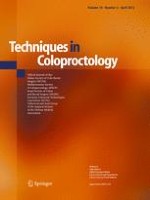 Prevention and Treatment of Complications in Proctological Surgery