A DNA test based on loop-mediated isothermal amplification (LAMP) and colorimetric gold nanoparticle (AuNP) hybridization probe to detect the presence of human DNA in forensic evidence was developed. The LAMP primer set targeted eight regions of the human cytochrome b, and its specificity was verified against the DNA of 11 animal species, which included animals closely related to humans, such as chimpanzee and orangutan. By using the AuNP probe, sequence-specific LAMP product could be detected and the test result could be visualized through the change in color. The limit of detection was demonstrated with reproducibility to be as low as 718 fg of genomic DNA, which is equivalent to approximately 100 plasmid DNA copies containing the cytochrome b DNA target region. A simple DNA extraction method for the commonly found forensic biological samples was also devised to streamline the test process. This LAMP-AuNP human DNA test showed to be a robust, specific, and cost-effective tool for the forensic identification of human specimens without requiring sophisticated laboratory instruments. 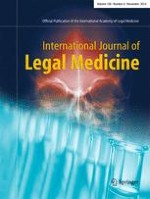 Assessment of the role of DNA repair in damaged forensic samples