Co-expression modules were established with the help of WGCNA and the interactions among them were performed by R language. Biological process and pathways analysis of co-expression genes were figured out by GO and KEGG functional enrichment analysis using DAVID dataset.

In this study, expression data of 4,000 genes from 136 samples with breast cancer was used for the establishment of co-expression modules. And nine modules were identified. There was much higher scale independence among different modules by interactions analysis. Moreover, there was an obvious difference in adjacency degree among different modules. The most enriched pathways as immune response and ubiquitin-mediated proteolysis were identified as the most critical modules of breast cancer by GO and KEGG enrichment analysis.

Our result demonstrated that immune response and ubiquitin-mediated proteolysis could serve as prognostic and predictive markers for the occurrence of breast cancer, providing evidence for further analysis in the prognosis and treatment of breast cancer. 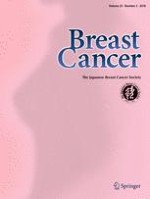 Peritoneal cancer arising after total abdominal hysterectomy and bilateral salpingo-oophorectomy for cervical cancer in a patient with right breast cancer and germline mutation of BRCA1 gene: a case report and literature review

Correction to: A comparison of clinicopathological characteristics and long-term survival outcomes between symptomatic and screen-detected breast cancer in Japanese women