Congenital afibrinogenemia (OMIM #202400) is a rare coagulation disorder that was first described in 1920. It is transmitted as an autosomal recessive trait that is characterized by absent levels of fibrinogen (factor I) in plasma. Consanguinity in Pakistan and its neighboring countries has resulted in a higher number of cases of congenital fibrinogen deficiency in their respective populations. This study focused on the detection of mutations in fibrinogen genes using DNA sequencing and molecular modeling of missense mutations in all three genes [Fibrinogen gene alpha (FGA), beta (FGB) and gamma (FGG)] in Pakistani patients.

This descriptive and cross sectional study was conducted in Karachi and Lahore and fully complied with the Declaration of Helsinki. Patients with fibrinogen deficiency were screened for mutations in the Fibrinogen alpha (FGA), beta (FGB) and gamma (FGG) genes by direct sequencing. Molecular modeling was performed to predict the putative structure functional impact of the missense mutations identified in this study. 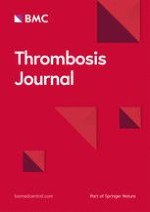 Paget-Schroetter syndrome in the absence of common predisposing factors: a case report